by The Sassagoula Sentinel
Wednesday 20th June 2018 was the 31st Anniversary of popular Port Orleans French Quarter greeter Arneil De Witt starting his long career with Walt Disney World. Unfortunately, the day also signifies Arneil's retirement from the company, effective immediately, due to unanticipated health concerns. Although he is in no immediate danger, he has been advised to "slow down" and having also just celebrated his 70th birthday he has decided it is time to retire.

Arneil asked regular guest and friend Steve Denney if he could pass on a message to everyone that he will greatly miss his Disney role, and especially his many friends visiting from around the world. He sends his prayers and best regards to all of his French Quarter "family".

Here at PortOrleans.org we would like to send Arneil our very best wishes for a long, relaxed and happy retirement.

Good Luck Arneil, and thanks for all the years of dedication that you have given to your guests as the "face of Port Orleans French Quarter". Your welcoming charm and wit will be greatly missed, especially by all those children who have created their very own Disney Wishes by throwing your colourful coins into the lobby fountain. 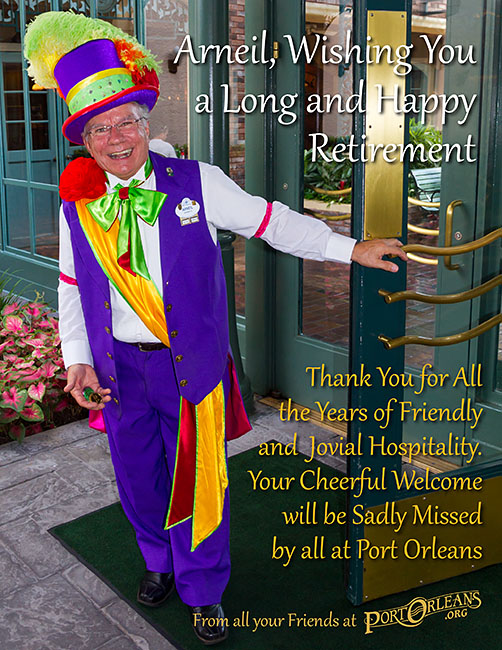 On 2nd July, after his Disney leaving event, we presented Arneil with a framed memento and a booklet of some 300+ messages from his fans 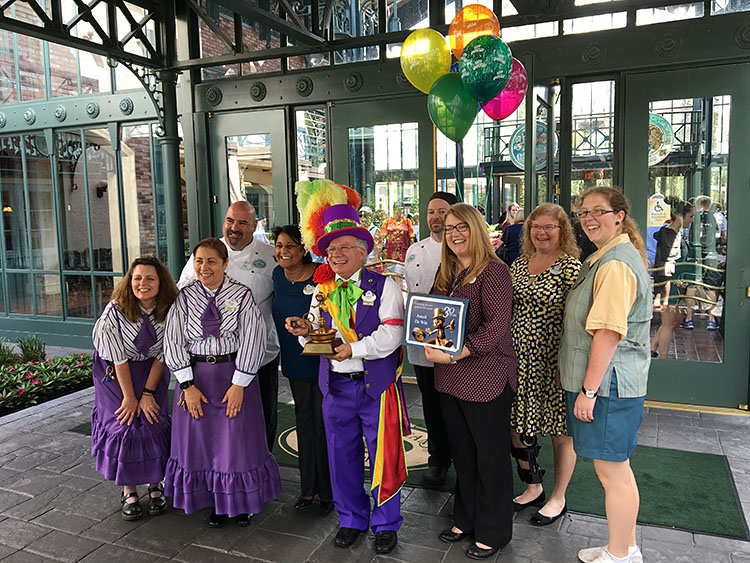 Arneil one year ago, being presented with his 30 year long-service award

by mamabunny
More than a month later, and I still can't think about Arneil not being there, greeting us when we arrive, without tearing up...

I hope he is happy and healthy as he can be, and that he never loses his warm, wonderful smile.

by MardiGroggy
Arneil is doing fine. We spent an evening with him and his wife last week. We had dinner and a carriage ride around FQ, as well as spending some time in Scat Cat's. In all the years he worked at Disney, he had never taken the carriage ride, so we figured it was about time to do that. Wonderful evening. He is doing well, but I know he also misses all his friends at FQ.

by mamabunny
Oh that's so wonderful!!!

I know that I will shed a tear... or few! when we arrive next month, and he isn't there. It's silly, I suppose, but he was the first person to greet us at POFQ all those years ago, and he always seemed so genuinely happy to see us every time we passed through his doors. He was typically the first person we saw at POFQ, and the last CM we waved goodbye to. I'm so glad now that we had the chance to stop and have a lovely visit with him last year, on our last trip. Like so many other families, we have pictures of our daughter as she is growing up with Arneil beaming at the camera.

I am so very happy to hear that he is doing well, and that you all had such a lovely time - and that he got that long-waited for carriage ride!

by Andybear
That's a shame. I've read so much about him and was looking forward to meeting him when I stay at POFQ soon. Has he been replaced?

by Admin
I believe his replacement is either due to start soon or has already started. I think his name is Jim.